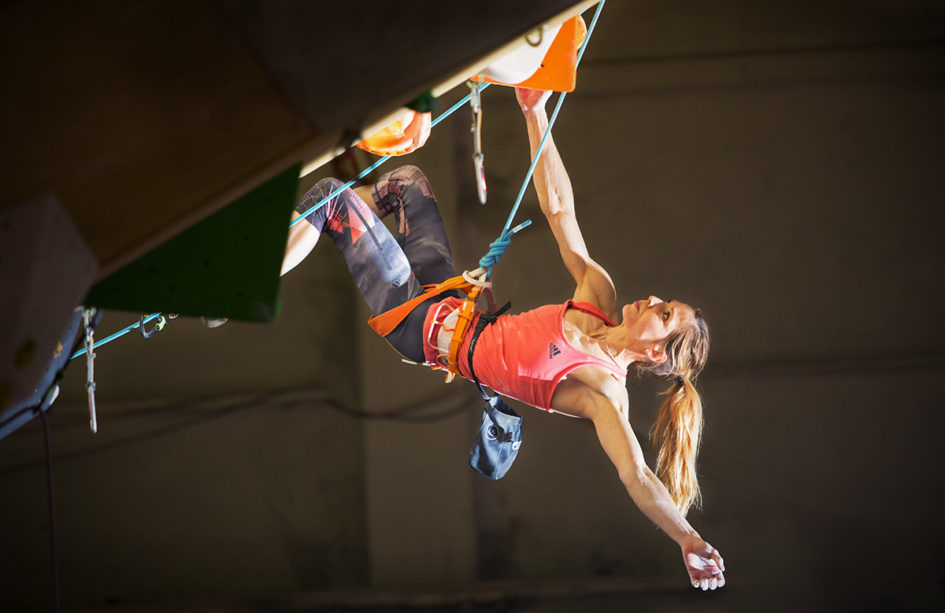 [Gym open to public until 18:00 with some limitation]

Our juniores climbers will be explaining the 3 disciplines, the different training & the methodologies to get prepared on these so different skills.

Martina De Petro
FASI’s member since 2013, she is Champion of the Regional Lombardy Absolute Boulder Championship 2017.

Asja Gollo
Since 2013 she is part of the Italian National Youth Team and since 2015 also of the Senior National team.  She is vice-champion of the U16 World in Lead 2014.

Davide Colombo
In 2017 he won European Boulder Cup, Italian Juniores Cup in Combined and Boulder and U16 Boulder and Combined Italian Championship.

Matteo Manzoni
At 12 he climbed his first 8a and he climbed up to 8b+. He also solved boulder problem up to 8b level.

Pietro Biagini
He starts his climbing career at the age of seven. He actually scores more than 200 routes above 8 grade, 14 8C and 2 8C+.

Prizes are offered by Oliunìd.

Every athlete will be set her or his own problem and every climbers will climb these all! Creativity, strategy and a bit of “malice” will be the ingredient of this contest as well as the technical skills.

Katharina Saurwein: in recent years, she has been doing more and more outdoor climbing, and is particularly adept in highball bouldering. She climbed Dihedral Wall on El Capitan in Yosemite with Jorg Verhoeven and then sent as first women Final Frontier.

Giulia Medici: she has been part of the youth national team for 4 years and of the senior for 2.

Gabriele Moroni: he has been a point of reference for Italian climbing for more than ten years.He sent up to level 9A+ with 8 routes of 9A level, and first Italian to send Action Direct in Frankenjura.

Andrea Zanone: he says “I really love route setting, it’s not only a job… it’s my passion! And a way to share my passion for climbing to other people”

Additionally, two WIldCarded athletes (1 woman and 1 man) from the Friday RNBC contest will have the pleasure to climb with the above athletes!

In the city of Milan the best ever world wide and Italian climbers, the ones who raised the Outdoor difficult level above any foreseen limit, are challenging on the incredibly overhanging roof @RockSpotNordOvest!
3 routes will be prepared for them by Alberto Gnerro to be sent Onsight (2) and after-wourk the last one.

Laura Rogora: since her first climb for fun, Laura has now become the absolute Italian champion of Lead and Boulder. She was the first Italian female climber to climb a 9a. She is totalling now 2 9A, 2 8C+, 3 8C.

Maja Vidmar: since 2002 she participates in the World Cup competitions, winning them. She is also one of the strongest women on the crag with a climb of 8c +.

Mina Markovic: from 2009 to 2014, she participated in most of the stages of the World Cup in lead and bouldering, where she obtained the combined title in 2011, 2012 and 2013, due to high rankings in both disciplines

Adam Ondra: he is the only athlete to have won the World Championships in two disciplines, lead and bouldering. In2017 he have redpointed a route with a proposed grade of 9c.

Jorg Verhoven: he opened up some hard routes on big walls where he is now mostly investing his efforts. In the World Cup he won 22 podiums between Lead and Boulder and got a medal in the World and European Lead Championships.

Stefano Carnati: in 2017 he made the ascent Goldrake (9a + / 5.15a) at Cornalba in northern Italy. With his ascent, Carnati joins the ranks of the world’s best climbers.

Stefano Ghisolfi: he is now the strongest Italian climber, ever. On November 2015 he first ascended Lapsusin Andonno (Italy), a 70 holds route for which he proposed a 9B (5.15b) grade for a total of 3 9B routes and some 20 routes above 9A.

Additionally, two WIldCarded athletes from the Friday RNLC contest will have the pleasure to climb with the above athletes!